Everything you need to know about CEWS 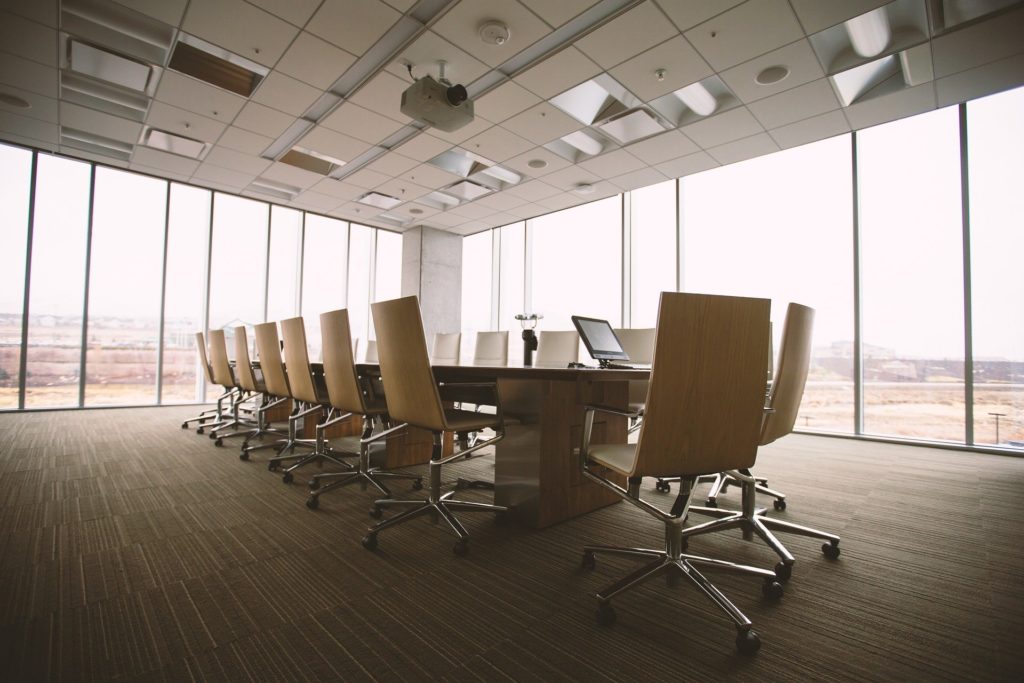 On July 17, 2020, the Government of Canada (Government) released draft legislative proposals that would extend the Canada Emergency Wage Subsidy (CEWS) until at least November 21, 2020, and make the CEWS available to an expanded group of employers.

We are now beginning to prepare applications for Period 5 of the Canada Emergency Wage Subsidy and it’s important that those who have been eligible in the past understand the changes of this program and how it will impact your subsidy payments going forward. Changes to this program also allow for employers who have not previously qualified with a minimum loss in sales revenue by 30% to now apply if they have had a comparable loss since the start of COVID.

To qualify for the first claim period (March 15 to April 11, 2020), eligible entities must have had a reduction by at least 15 per cent of their qualifying revenues in March 2020, as compared to one of two reference periods, being March 2019 or the average of January and February 2020. For the two subsequent four-week claim periods, eligible entities must either have qualified by meeting the revenue reduction test in the immediately prior claim period, or show a revenue reduction of 30 per cent, as compared to the applicable month (April or May) in 2019 or the average of January and February 2020.

For the fourth claim period, which has already ended, the qualification criteria and program design are identical to periods one through three. That is, to qualify, eligible entities must have met the 30 per cent revenue reduction test in either May or June, as compared to the same month in 2019, or the average of January and February 2020, depending on which prior reference period was selected by the entity.

For the fifth and subsequent claim periods, the CEWS has been substantially redesigned. Eligible entities no longer need to demonstrate a particular percentage by which their revenues have been reduced in the relevant reference period in order to qualify for the CEWS.  Instead, eligible entities need to demonstrate that their revenues have been reduced, but the amount of the subsidy to which an eligible entity is entitled depends on the extent to which its revenues have been reduced; for more information, see Amount and Treatment of Subsidy below. For the fifth and sixth claim periods, eligible entities that would have been better off under the prior program design are entitled to receive a subsidy calculated as it was for periods one through four, provided that they demonstrate the requisite 30 per cent decline in revenues. This ensures that employers that made retention and compensation decisions based on the existing design of the CEWS.

For claim periods one through four, the amount of the weekly wage subsidy in respect of each eligible employee that dealt at arm’s-length with the eligible entity during the qualifying period is effectively the greater of:

Fifth and Subsequent Claim Periods: Base Percentage and Top-Up Percentage

No minimum revenue reduction threshold is required for periods beginning July 5th and later. Instead, any decline in revenue as compared to the previous period will now be eligible by multiplying the sum of the base percentage and its “top up percentage” for the claim period by the least of three amounts:

All calculations for Periods 5 (Jul 5th– Aug 1st) and Period 6 (Aug 2nd – 29th) can use the “safe harbour rule” which is the previous calculation methods if the result is more favourable for the applicant.
See table below on calculation to determine % of wage subsidy you qualify for with a revenue loss of 50% of less 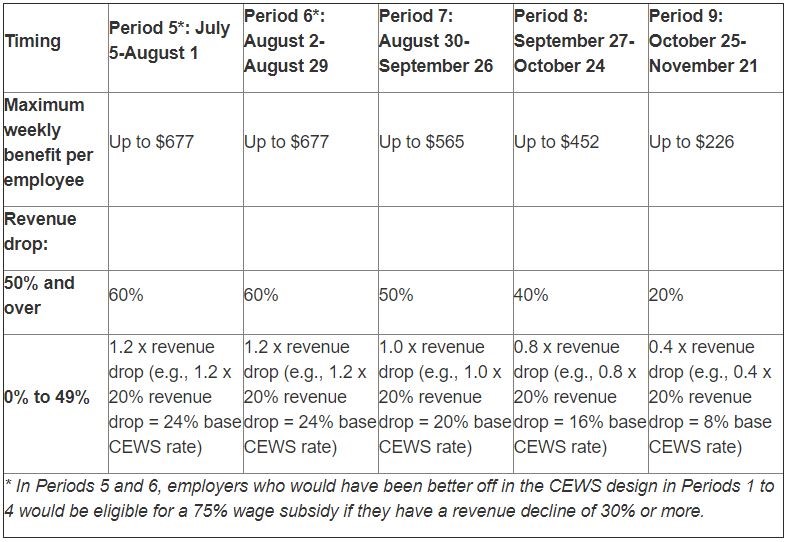 The “top-up percentage” provides an additional subsidy for eligible entities considered to have been the most adversely affected by the crisis. It is a function of the percentage (referred to as the top-up revenue reduction percentage) by which an eligible entity’s revenues in the three months preceding the claim period—for example, April to June 2020 in respect of the fifth claim period—have declined as compared to either the same three months in 2019 or January and February 2020. Specifically, top-up percentage is computed as 1.25 multiplied by the amount by which the eligible entity’s top-up revenue reduction percentage exceeds 50%, capped at a maximum of 25%.

Main differences between the previous calculation methods and the new methods

If we have been processing your application for the CEWS program, we will continue to do so on your behalf. If you haven’t previously applied for this program and have not spoken to one of our team members regarding eligibility and would like us to begin applying on your behalf, please contact the office (905-693-8269) and we will make sure you are included in the Period 5 application starting August 17th.

Any questions regarding this program and changes can be sent to our info@airikkapassmore.com email or you can call us directly.

Stay healthy and we hope these changes give you some peace of mind as you continue to re-build and change the way you and your team are doing business in this new normal.

Stay up to date! Sign up for our newsletter.